It was not hard to locate the Decados vessels. They stayed close together as they orbited Dalian, raining down destruction wherever they pleased. What few radio broadcasts still emanated from the planet gave evidence of Decados brutality. Even without the frigate as part of its orbital blockade, the Decados continued to shoot down any craft that tried to take flight. Dalian’s few power stations, military bases, transportation depots, harbors and even hospitals had all suffered at their hands. The Decados continually broadcast demands for the planet’s surrender. Some of the planet’s leaders had already offered to surrender, and the holdouts were clearly wavering. 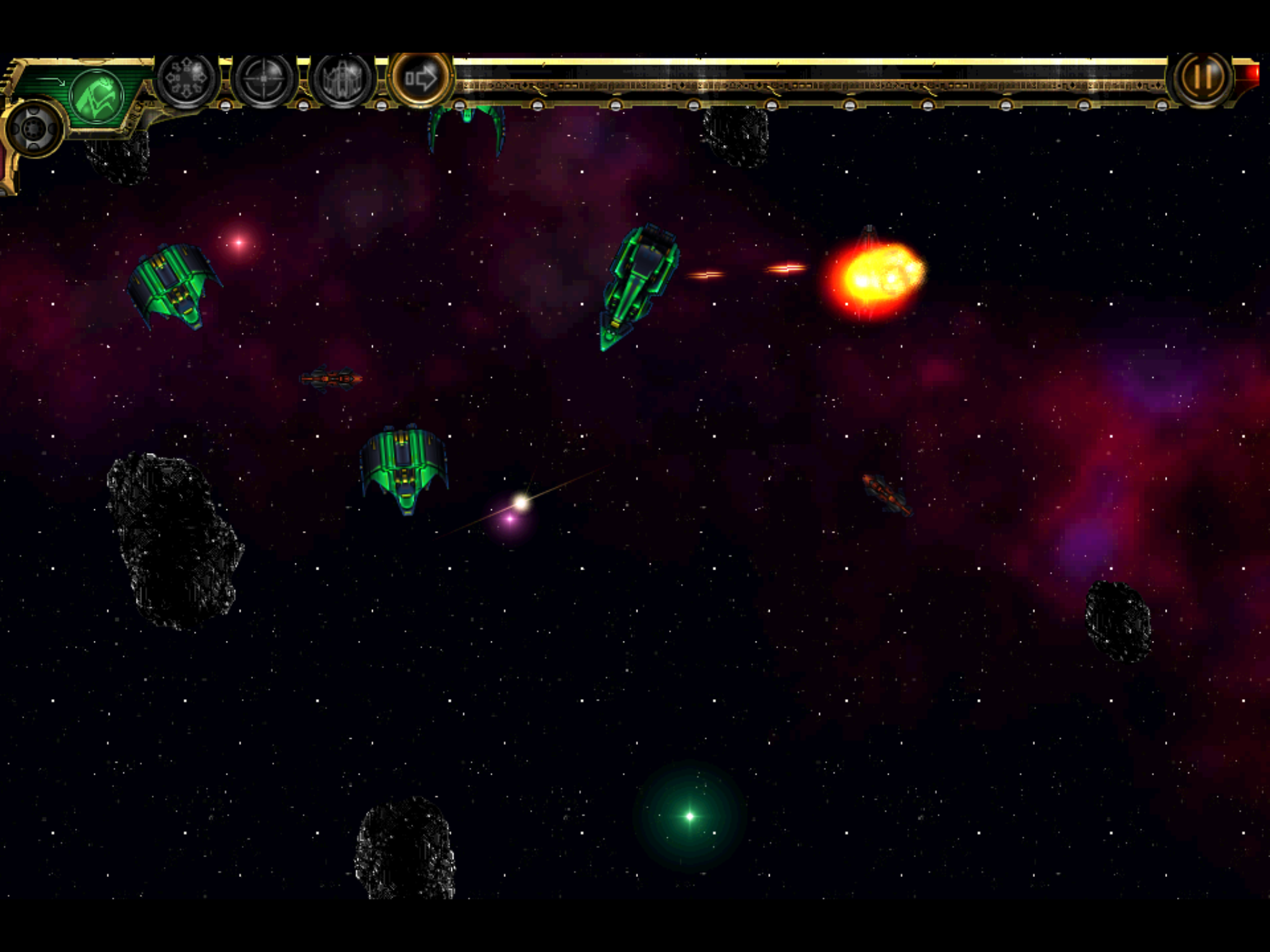 Tomas tracked the Decados ships’ broadcasts, and the Hawkwood vessels set sail from Opal. Atila wanted more time to familiarize the crew with the frigate’s guns and capabilities, but Leopold feared that Dalian might fall at any time. In the space between the two worlds his crew spent a day practicing the maneuvers required to bring them victory.

Leopold himself piloted the frigate in place of his old friend, and he quickly came to long for Tomas’ hands at the controls. He lacked Tomas’ years of Charioteer training, and it showed. His growing realization of his own failings ate at him. The harder he tried, and the harder he gripped the controls, the more his hand began to quiver under the strain.  Still, he trusted no one other than Tomas to command the explorer. While he trusted the smugglers enough in combat against the Decados, he had no reason to believe they would not turn on him once the fight was through. In any case, the smugglers lacked experience in ship-to-ship combat. This fight would require a sure hand at the helm of both ships.

Finally Leopold called a halt to their training. His hand was by no means the surest, but at least it had stopped shaking. He ordered the two ships to dock together, and brought both crews on board the Pride. His hand almost started shaking again as he saw them try to line up at attention. The odd assortment of Hawkwood veterans, miners and smugglers made a bizarre mix. While all had reason to hate the Decados, only the miners were truly committed to this battle. Their friends in the distant reaches of the solar system required the Decados siege end.

While some of Leopold’s Hawkwood veterans had lost friends and family to the Decados during the Emperor Wars, that was years ago. Leopold and his friends could easily return to Hawkwood space, richer by a frigate. Since the Decados attacked him first, he could keep his prize. Selling it would enrich all his crew, some far beyond what they had ever had before. Still, he saw their faces and knew the resolve that showed though. While some no doubt hoped for even greater riches, most were putting their lives on the line to help the unknown people of Dalian.

The smugglers were the unknown factor. While the Decados blockade had halted their livelihood, the siege would not last much longer. Surely they could resume their illegal activities once Dalian surrendered. All the same, Leopold required their technical skills. The frigate required far more crew members than had his explorer, and several of his more experienced followers had suffered injuries in the last fight. Reliable or not, he needed the smugglers.

The traditional Hawkwood speech before a battle was a call to honor and duty, a reminder that principles mattered more than life itself. It also stressed the crew members’ loyalty to one another, but Leopold was not sure that would resonate with this myriad bunch. Instead he took a new tact, reaching back into humanity’s distant past for the climax of his speech.

“For hundreds of years Dalian has been separated from the rest of humanity, alone in the darkness of space. Your people have fought and scraped to maintain these worlds, no doubt fending off crises that could have left you on the edge of disaster. Now the jumpgate has reopened, and the heavens can be yours again. But you see before you the best and worst that the Known Worlds have to offer. On one hand is the very threat that caused so many worlds to close their gates – cruel raiders who would take everything for themselves, tearing down what it has taken generations to build. It’s easy to want to hide, hoping that they will take what they want and leave. But that is never the case. With every taste of success the raiders return, demanding more and more.

“On the other hand is the questing spirit of our people, anxious to reunite all the Lost Worlds. This is not for personal wealth or even glory, though I certainly hope we all share such. This is for the benefit of all people, warrior and worker alike. Humans do not prosper isolated and alone. We thrive together, sharing the sacrifices and rewards alike. The jumpgate is open again, and more ships will fly through it. They will bring riches long unseen here, seeking to trade for Dalian’s forgotten treasures. Everyone in this room will benefit from that commerce, as will everyone on the planets from which you come.

“Tomorrow’s fight is for far more than wealth and the rule of one system. Should the Decados win, all the wealth of Dalian flows into the coffers of the nobles who have bombarded your worlds. Some locals, those willing to do the Decados bidding, will prosper. All the others suffer, as do the rest of the Known Worlds. We lose all the benefits that come with your growth and prosperity.

“It is for a humanity that shares its risks and rewards, its tragedies and triumphs, its fears and its hopes. Alone, we all shake in the dark. Together, we are as my blade. All humanity is the weight of this sword. We are its razor-sharp point, ready to drive our way through Decados hearts!” Leopold ended his speech with a flourish of his sword that brought cheers from all the members of his far-flung crew. He then dismissed all but a skeleton crew, recommending that the rest get a good cycle’s sleep in preparation for the battle to come.