While level-based systems do well explaining some aspects of childhood where we can make great progress all of a sudden, like turning over and breast feeding, most of our skills advance slowly and methodically, like Donald Trump’s hair piece taking over his brain.

In adults, these skill progressions happen slowly. For instance, most adults have thousands of hours experience driving cars, but many have failed to develop any skills beyond causing other drivers to wet themselves while texting and driving. We have spent thousands of hours online, yet people still fail their gullibility rolls when it comes to Nigerian princes, Microsoft giving hundreds of dollars to people who like its Facebook page, or king.com games being fun.

In babies, however, we can see these advances happening before our eyes. For instance, tummy time is an important skill development system for newborns, where they learn to use their muscles, raise their heads, and even crawl. Sage had quickly leveled in the critically important Baby Turn Over class, but it is hard to see that advance. Day one she turned on her side. A couple days later she turned on her belly. It’s not like she spent hours in between rocking from side to side, slowly increasing her degree of rotation while humming “Turn, Turn, Turn.”

On the other hand, watching her advance in Lift Head, I got to see her make minute progressions. One moment in Tummy Time her head was flat on the quilt, eyes darting around. The next she raised her chin and dropped it again. Bit by bit she raised it more and more, eyes becoming more fixed and determined. Finally she could hold it up for several seconds before it fell back to the quilt.

For the next several days, we got to see the Lift Head skill in action. At first, she clearly had a 25-percent chance, as she would succeed about once in every four attempts. Then it increased to a 33-percent chance, and now her character sheet shows her having a 42-percent Lift Head skill, and every successful use of the skill clearly gives her an opportunity to increase her chance of success.

The crucially important Giant Smile skill is another example of continuing skill development. Sage got her first few crucial skill rolls in Giant Smile courtesy of the Intestinal Gas trait, but it was not too long before she was trying to form them even without the benefit of internal tumult.

My wife and I debated whether the new smiles were in response to positive stimuli or just her trying out facial muscles, until last week when I was holding her, and my wife snuck up and kissed her on the cheek. Sage’s head swiveled immediately, and when she saw her mommy, a smile exploded across her face. 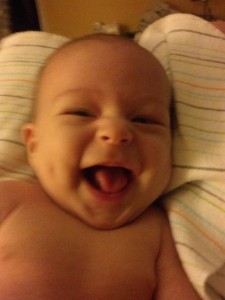 Yes, a natural 20, critical smile hit to the heart!
I remember experiencing this skill progression (and some smiles) early with roleplaying games. I was in elementary school when Runequest came out, which explicitly made this connection. The easiest way to increase a skill was to succeed at it, though characters could also train up. For Fading Suns, we added the idea that failure could also lead to success. We recommended that gamemasters encourage players to spend their experience advancing skills they have attempted, whether they succeeded or not. This encouraged players to justify their characters learning from failure as well as success – a critical part of being human. After all, if we had to wait to succeed at something to get better at it, many of us would never make any progress.