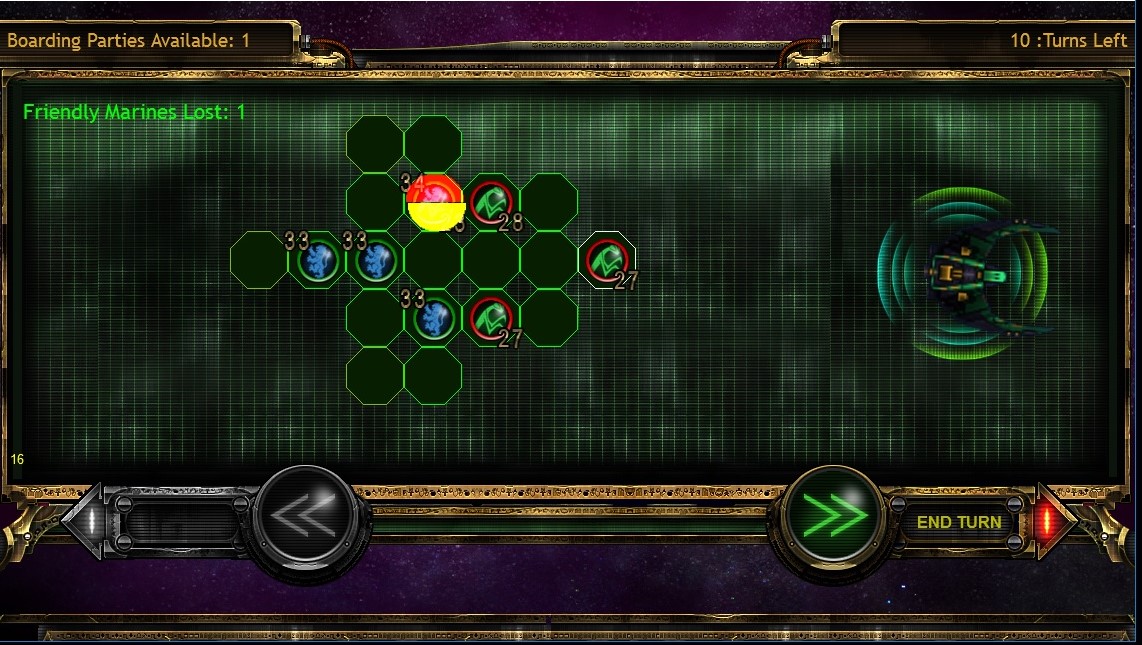 Both of them knew it would not have to. Tomas’ hands flew over the ship controls, and the explorer’s maneuver jets spun it around so its starboard shield came to bear. The Mane’s momentum kept it speeding forward, and the Decados’ next broadside tore down those shields. Once more the Mane twirled, and this time its aft shields took the blow.

Now, finally, the Mane returned fire, but not with its lasers. Instead, magnetic grappling hooks shot out of the explorer, clamping onto the frigate with fierce intensity. As the grappling hooks locked on, Leopold retracted their lines. The two craft slammed together. Now too close for the frigate’s blasters to attack, Leopold sighed in relief. As he reached for his rapier and revolver, he glanced out the fore view screen. There he could see his marines, wrapped in their vac suits, clambering across the grapple lines. Both ships shuddered, and Leopold knew Atila had detonated an explosive charge against the frigate. He hurried through the ship, anxious to join his troops already battling their way through the enemy hull.

Nothing could ever prepare someone for the mix of utter exhilaration and utter terror that was boarding combat. Leopold at least had a survival suit, much sturdier than the cheap vac suits most of his troops used to cross the void. Leopold latched onto a grapple line and threw himself out into space. The two giant vessels strained against each other, pinioned together by several small but phenomenally strong lines. One of these lines was the only thing that kept Leopold from shooting off into the infinity of space, likely to never be seen by human eyes again. The void was at once the most beautiful and most terrifying thing he had ever seen, resplendent with jewel-like stars and the all-consuming darkness between them.

A jolt ran through Leopold’s legs as he collided with the frigate. He crawled across its hull to one of the breaches his marines had blown, and there found a scene of carnage. Wounded miners lay on top of dead Decados marines, and blood droplets hung suspended in zero gravity before him. Leopold spun through the frigate, racing for its bridge. Crossing through an iris valve, gravity returned, and he heard the battle ahead. He also heard the Decados ship straining against the grapple lines, trying to tear free. If it should break away before all his marines had crossed the void, his forces on both ships would be lost.

Around the next corner he found a squad of his marines locked in desperate combat with their foes. Axes and cutlasses whirled in the dim corridor. Slug guns saw little use in boarding combats, as errant bullets could easily damage sensitive machinery or even penetrate the hull itself. While the Mane was relatively new, having been built only 23 years ago, most ships were more like this frigate. Ever since the Fall, shipbuilding had teetered on the edge of becoming a lost art. People still flew ships made 1000 years ago, keeping them together with string, spit and prayers. Lots of prayers. This frigate had obviously been though many battles and gone through more owners than Leopold cared to imagine.

Leopold drew his own rapier and, in the same motion, ran it through one of the Decados. His miners cheered his arrival and redoubled their efforts. All of them had lost friends when the Decados on this very ship had attacked their city. The chance for vengeance drove them with a fury Leopold hoped would never be directed against him. They quickly cleared the corridor.

Leopold’s past battles with the Decados had familiarized him with this type of ship. He quickly led his squad forward toward the bridge, easily overcoming the enemy marines who tried to intervene. Once he seized the bridge it would be no problem to get the rest of the enemy to surrender, as he would have complete control of their life support and other systems.

In moments they reached the bridge door. Two of his axe-wielding miners tore into it. As soon as they burst a hole in it, Leopold charged through. The frigate’s captain was ready for him, along with what had to be a squad of her best marines. She drew her own cutlass, and as the miners poured in though the breached door, she called him out.

“Baronet Tamara Decados of Severus. You will die a martyr to your foolhardiness.”

“Sir Leopold Hawkwood of Gwynneth. I will turn you over to Dalian for its justice.”

Tamara’s grin showed her teeth. She sprang at him, her cutlass slashing the air before him. Like most nobles, Leopold’s energy shield would no doubt stop the blow, but he never relied solely on such devices. He deftly parried her cut with his rapier and turned the motion into a riposte. He moved too quickly, and he felt his blow stop inches from Tamara’s face as its force activated her shield. Her grin widened, and she redoubled her efforts. Leopold found himself hard pressed. He moved his rapier in an intricate dance that left a wall of steel between him and the enemy captain. More of his marines ran onto the bridge, and it was Leopold’s turn to grin as he saw Atila hack down one of the Decados defenders.

Leopold saw anger replace Tamara’s grin. She now realized that, despite the small size of Leopold’s ship, it carried more troops than hers – troops who clearly had revenge in mind. Her only chance was to defeat Leopold and then break free of the damaged Hawkwood ship. A tiny, ornately crafted pistol appeared in her hand. Leopold saw the telltale energy cell and plasma tube of a blaster. Just as a blaster cannon could tear through ship’s shields, so could this tiny pistol rip though his.

Tamara’s grin returned as she slowly turned the blaster in her hand, toying with Leopold. She raised it to eye level, pointing it at his head as her cutlass pressed against his rapier. As she prepared to squeeze the trigger, another hand reached out, just slowly enough to bypass Tamara’s shield. Atila forced her hand up, and the blaster bolt tore through the ceiling of the bridge. Sparks flew from the shattered electronics. The ship’s lights flickered and died, leaving only the emergency lights glowing. Alarms went off, indicating a life support system on the edge of death.

Despite his anxiety, Leopold’s hand moved slowly. He carefully slid the point of his rapier passed Tamara’s shield and pressed it against her throat. “Your vessel is mine. Announce your surrender now and I spare your life.” She nodded her assent, but Leopold did not remove his blade until she confirmed it over the shipboard intercom. Then members of both crews leapt to work, salvaging the life support before everyone outside of a survival suit died.