Thanks to the Georgia Gala for this award in recognition of my work as a game designer and on behalf of Georgia’s blossoming entertainment industry. It was an honor to be recognized in this way. The text of my speech is below (though I went a bit off script) and you can see a video of most of it HERE (though the video does cut off the nice response to me thanking RPGBaby). The nomination video is HERE. 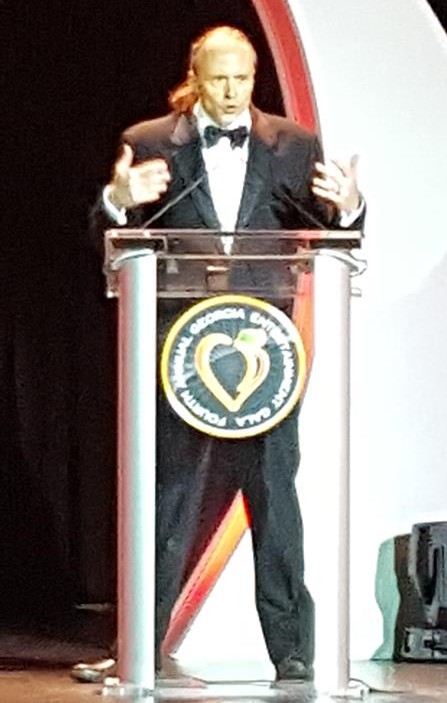 “First I would like to thank my two business partners – my wife, Meldrena Chapin, and our eight-month-old daughter Sage.

I would like to accept this award on behalf of the almost-500 members of the Georgia Game Developers Association. Georgia has become one of the 10 largest states for game dev and digital entertainment. Not only do we have industry leaders like Hi-Rez Studios, Tripwire Interactive and Xaviant, but we also have studios on the bleeding edge of technology. Many of you heard that there were 30 virtual reality productions at Sundance this year. Georgia is home to some of the top VR companies in the world, like Soverance Studios and Pulseworks Interactive.

Once the total entertainer had to be a singer, dancer, comedian and more, like Sammy Davis Jr. Now it is someone who can handle film, games, apps, TV, music, livestreaming, vid casting, podcasting and whatever is going to rack up 40 million new users next year.

Georgia is now at the epicenter of this cross-media explosion. With an incredible film industry, explosive game industry, robust music business, great schools and dedicated public officials, it offers greater access to all of these fields than anywhere else. We all have the chance to cross the media divides quickly and easily, working together with ease. The Georgia Entertainment is one example of this cross-media approach. DeKalb County offers another example of this, soon to open an entertainment office that supports creators in all these fields.

All of us can benefit from this new approach, moving past the traditional limits of our professions to work with an amazing array of creative, talented people. The entire state profits from this approach, and I look forward to working with many innovative people who can make the leap to the next level.”