We are currently trying to get Fading Suns: Noble Armada greenlit on Steam, and would really appreciate your support: http://steamcommunity.com/sharedfiles/filedetails/?id=220478303 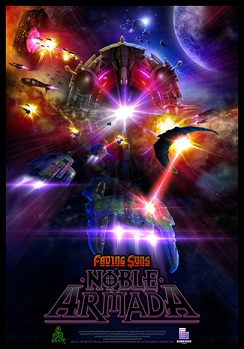 A number of people have asked why we are working on a Noble Armada computer game and not Emperor of the Fading Suns II. The short answer is that EFS took an exponentially larger budget than we have for this game.

Emperor of the Fading Suns took the macro approach, giving players the chance to rebuild humanity from one politically fractured world to a star-spanning empire.

The Fading Suns RPG took the micro approach, giving players the chance to take an individual role in humanity’s progression … or decline, depending on your campaign and troupe desire. We set it shortly after the end of EFS, and designed things so players could base their RPGs on the results of their own strategy games.

We initially saw Noble Armada as a mix of the two. If you have played the miniatures game, you know it is focused on control of a ship or fleet taking part in some of the wars in the heavens. However, the game also allows you to return to the micro level, with RPG characters having an impact on the space battle. Ken and Chris partially designed the miniatures game to provide a recourse for our RPG players who wanted more detailed space combat rules.

When we started work on the Fading Suns: Noble Armada mobile game, we saw it fulfilling that same role. However, there are some significant differences between a multiplayer miniatures game and a single-player space combat game.

One of the fundamental differences is the pleasure of uncertainty. In the miniatures game, you usually know the enemy’s order of battle, but the other player’s strategy and tactic are mysteries. Computer games, however, benefit from more unknown factors.

In computer strategy games, we like to talk about 4X games. Exploration is the first of those Xs (yeah, they should be 4E games, but 4 Xs is seXier). I’ve heard this X defined a number of different ways, but I usually describe it as the search for both resources and obstacles. In EFS, players get to explore both the surface of planets and space itself, encountering foes and opportunities alike.

It is hard to do that in a PvP miniatures game unless there is a GM, but it is easier to do in a computer game. During the development of this computer game, we realized that it was even more interesting to explore unknown solar systems than to emulate the battles of the miniatures game. We still allow for that, primarily via Skirmish mode, but most of the Campaigns now allow players to rediscover the lost worlds of humanity.

In the Fading Suns, one of the primary themes is the need to rebuild humanity after one of its far-too-numerous periods of rise and decline. Humanity is fractured, with many locked behind forgotten jumpgates. When players enter a new system, they may not know what kind of foes they will fight, how many there will be, or even what the planets there will hold.

While there is still the chance to build up your forces, strategy-game style, I find this exploration one of the funnest parts of FS:NA, and it became the feature of the FS universe I think the game illuminates best.

Let me know if you have any questions about Fading Suns: Noble Armada.